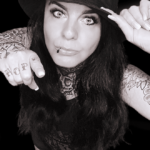 Freulein P has become an established part of the Berlin club scene and when it comes to stable, powerful but also melodic techno, you will definitely hear and see a young lady standing behind the decks.
Her Name: Freulein P / Her Mission: Techno for the World
Her passion for electronic music was already awakened in 1995. A child of the 90s techno scene. And so she experienced all the ups and downs of this genre. Her personal musical path began in 2007. First she chose the harder style under another name to make the clubs in Germany, Holland, Austria and Switzerland unsafe.
But she later found her own note and passion in the driving techno and since 2015 has been mixing up the club scene under the pseudonym Freulein P.
She already had played alongside acts like : Tomcraft, Northern Lite, Drumcoplex, Pappenheimer, Vinicius Honorio, Tok Tok, DJ Emerson, Simina Grigoriu, but also with many local Berlin acts like DeKai, Thomas Lizzara, Alfred Heinrichs or Martin Books on the decks.
In 2018 the founder of the very successful Facebook page „Techno all about Techno“ started the project „Berlin Techno“ and regularly organizes events where she books Berliner Dj´s and supports the Local Heroes.
One can see her passion when she plays. So much energy and lifeblood flows into her sets. Get in touch yourself and visit Freulein P at one of her gigs.